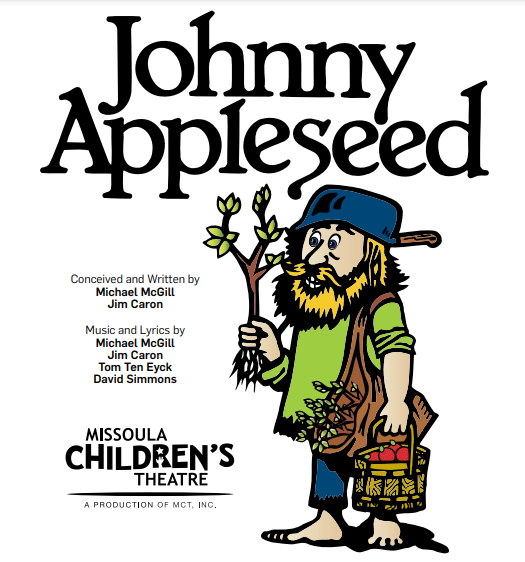 June 7th-12th @ 10:00 AM
PrevPreviousKMRP Radio Show
NextJohnny AppleseedNext
Shows will be performed Friday, June 11th at 7 p.m. and Saturday, June 12th at 2 p.m. There is no admission fee but free-will donations will be accepted to support Missoula Children’s Theatre. Attendees are asked to wear face masks.

Music and Lyrics by

They say an apple never falls far from the tree, and we have Johnny and his good pals, the Apple Seeds, to thank for an ample abundance of apple trees! Johnny and his little buddies traveled across the land on foot, made friends with all kinds of people and animals, and slept under the twinkling stars. Their delicious, heartwarming adventures yielded orchards full of juicy, delectable fruit that took a crunchy bite out of hungry tummies across the west. Even a grumbly wolf is won over by the sweet taste of the apples and the kindness of friends. The tale of JOHNNY APPLESEED is a tasty reminder that kindness is at the core of friendship.

Tuition for first child is $40 and $20 for the second child in the same family.
For three children or more in a family, they are free after the first two, but we will need to have a record of their names and ages.
No Responses
Subscribe To Newsletter